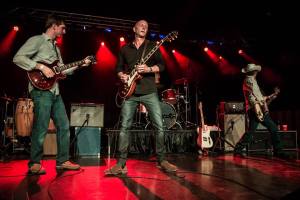 After decades in the local Columbia, SC music scene fronting the popular party band Tootie & the Jones, singer and guitarist Murray “Don’t call him Tootie” Baroody decided to mark his 50th birthday by writing and recording some of his own songs. Once he enlisted the assistance of Jam Room Studio owner and local bassist Jay Matheson and drummer-for-everyone Steve Sancho, a surprising thing happened—the trio bonded and decided to become a ‘real’ band, The Distributors.

“I called up Jay, who I’ve known for years even though our bands were on opposite ends of the local scene, and he was the facilitator for the recording sessions,” Baroody says. “He brought in Steve and it just kind of happened from there.”

What happened was a happy accident three decades in the making; the collective experience of the players shows in every riff, every groove, every beat of these songs. They are not trying to be fancy, hip, or even all that current; rather they capture the timeless essence of simple rock ‘n’ roll pleasures like nothing since the glory days of 70’s rock. Credit Matheson for steering the sound in a certain direction—a no-frills zone, if you will.

“We didn’t have a gig anywhere in the plan yet, we were just making a record,” Matheson says. “I still make records the old fashioned way, playing in a room together. It’s definitely a 70’s rock aesthetic, more blues based rock.”

There’s not really a genre or group being targeted here, unless you consider ‘regular guy rock’ a proper sub-heading of rock ‘n’ roll. Baroody’s everyman voice avoids overt influences and period clichés on the slow Humble Pie/Foghat blues burn of “Bad Love” or the hard-riffing Neil Young and Crazy Horse styled “Scars.” He shows his range on “Gone” with its part rockabilly, part garage rock vibe, and “Crazy”, which offers up a brief yet irresistible flash of 90’s pop-rock that will sound familiar to fans of Hootie & the Blowfish or Sister Hazel.

“You get to a certain age and ask yourself, ‘What do I want to do with my time?’–since I’m not that into golf, I just play music, my kids like music, I just decided to make some records,” Baroody explains.

Some guys have a Monday bowling night; Baroody, Matheson, and Sancho had regular ‘studio nights’ at the Jam Room over an eight-month period where they would experiment, play together, write together, and just have a good time making music on their own terms. An initial batch of five songs included a couple guest spots from Dead 27’s singer Trey Francis (That’s Davis on harmonies, and the outro voice on “Crazy”) and guitarist Wallace Mullinax, Baroody’s nephew, leading to a few more songs and a fourth band member in Ben Irons.

“After Wallace did the slide solo on ‘Scars’ and the fills on ‘Bad Love’ we knew a slide player was a must on the next group of songs,” Baroody says. “I’ve known Ben for some time and he is one of the best slide players around. He did the slide solos on ‘Gone’, ‘Lies’ and ‘Amelia’ as well as put a lot of the final vocal harmonies together. He’s been a real asset with his talent and experience.”

So, is this a one time deal, or will the Distributors have a life beyond the new album?

“The chemistry between us has been really good, and we’re continuing to work on more songs already,” Baroody says. “It doesn’t feel like we used up all of our good ideas, there are plenty more in the tank—it’s just a matter of finding the time to get them out.”

It’s too bad the album won’t be coming out on cassette, because that’s the era these tunes evoke—just put the tape in the car stereo deck after school and turn it up loud as you peel out of the parking lot.

The Distributors will appear on WXRY Unsigned LIVE from The British Bulldog Pub on Sunday, June 28, 2015 at 8PM.