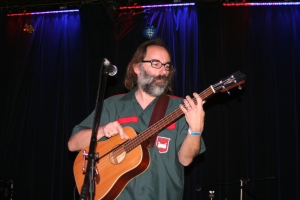 Chris Hardy, who is human. and his 4-stringed little friend, who is a piccolo bass guitar.

I’m a, Augusta, GA based solo artist/songwriter and bass player that doesn’t want to play a 6 string guitar. so i play a 4 string piccolo bass guitar. sometimes electric, sometimes acoustic!

I play all the instruments (drums, bass, guitar, keys, piccolo bass guitars, vocals) on my self-produced recordings, write all the songs and perform them live occasionally.
Bla bla bla, spent 6 years in the 434th army band as a percussionist, bla bla bla, there’s a “favorite local bassist” award named after me in Augusta, GA, bla bla bla, some of my songs have won awards in the Billboard song contest. aren’t i cool?

Join us at 8pm on Sunday at The British Bulldog Pub for WXRY Unsigned.