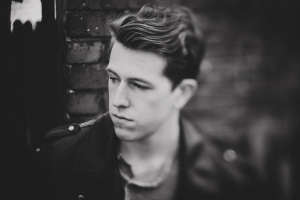 In Fall 2013, Nathan was the sole artist representing Nashville at the tenth annual Indie Week in Toronto. An annual music festival held over the course of four days and nights, Indie Week is by invitation only. Nathan played three shows during the festival. Closer to home, Nathan has been performing regularly at various writers’ nights and at popular local clubs such as the Basement.

“If Nathan Diller continues to make radio-ready pop like Frenzy, we can expect that more people will learn about him in short order,” writes Lucius Washington at Moozikoo.com. “The title track of his new EP has strong hooks and an easy to find groove.” A compilation of six songs written by Diller, Frenzy showcases the young artist’s range, from melodic Americana ballads to high-octane power pop.

Diller has surrounded himself with expert musicians, both in the studio and on stage. Frenzy co-producer, guitarist and bassist Chris Donohue plays regularly with Emmylou Harris, and has worked with a wide range of artists including Ben Folds, Robert Plant and the Civil Wars. Co-producer Leiweke has worked with Jars of Clay, Leigh Nash, and Jason Castro. Diller has two outstanding drummers on the EP. Drummer Tony James has backed up artists ranging from Cyndi Lauper to Lenny Kravitz to Coolio, while Ken Lewis has provided percussion for Carly Simon, Vince Gill, Sara Bareilles, Holly Williams, and Will Hoge.

Diller, 20, grew up in a musical household on a steady diet of Aimee Mann, Sheryl Crow, the Goo Goo Dolls and Jeff Buckley. He discovered a love for singing early on and became actively involved in community theater. Soon, his time was filled with voice, piano and dance lessons. Guitar quickly followed. After spending several years honing his skills at venues such as the Bluebird Café, 12th & Porter, Two Old Hippies and Chicago’s Lincoln Perk, writing and releasing Frenzy was the next logical step.

“These songs are little pieces of time,” Diller says. “Snapshots of life as I see it.” And where does his inspiration come from? “It usually starts with a word. I kind of expand it into something meaningful. Then it’s a stream of consciousness and playing guitar. I just sing and play….and see what develops.”

MarsBands.com calls Diller “a star in the making,” and predicts “It’s only a matter of time before fans start jumping on his bandwagon in droves.”